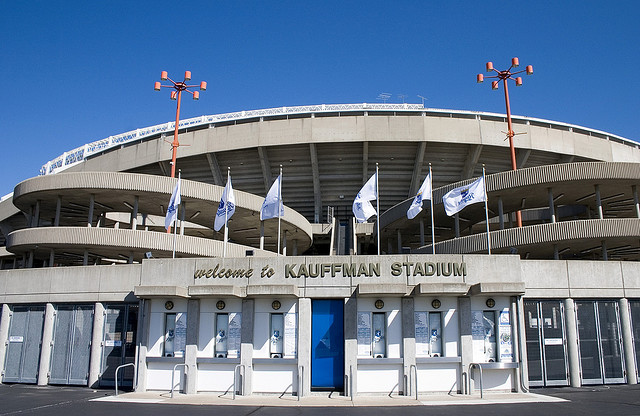 Kauffman Stadium, nicknamed "The K", was built April 10, 1973 as the home for the Kansas City, Royals American League Baseball team.

It was the last of the modern-baseball-parks  built in the major leagues from 1966 to 1991. Defying the conventional wisdom of the time it was a purposely built, Baseball Only Stadiums, that ignored those who felt that a standalone Baseball Stadium was not commercially  viable.

The Stadium is 42 year old and the sixth-oldest, active, major league baseball stadium. Along with Dodger Stadium it is the only modern style stadium that was never converted for use as a multi-purpose stadium.

When built,  the park carried the name Royals Stadium and would not be dubbed Kauffman Stadium until June 1993. You might find it interesting to note that it is the only American league ball park named after a person, Ewing Kauffmann, all the other carry a corporate-sponsored name.

As the last of the Modern Baseball Stadium it incorporated some of the design features found in the multi-purpose stadiums yet escaped the cookie-cutter look that plagued most of the stadiums of that era.

The Fountains At Kauffman Stadium.

The parks best know feature is the fountain and waterfall display. Known as the "Water Spectacular", it stands 322 feet high and located just behind the right field fence. It is the largest privately funded fountain in the world.

The fountains are on display before and after the game and in-between innings, while the waterfalls are constantly flowing.

On April 4, 2006 voter in Jackson County, Missouri approved a 0.375%  point sales tax increase to fund the renovation of Kauffman Stadium and neighboring  Arrow Head Stadium which were both part of the Truman Sports Complex.

Those renovation brought upgrades to the park that enhanced the fan experience and added features that rivaled those found in the earlier Multi-use facilities. 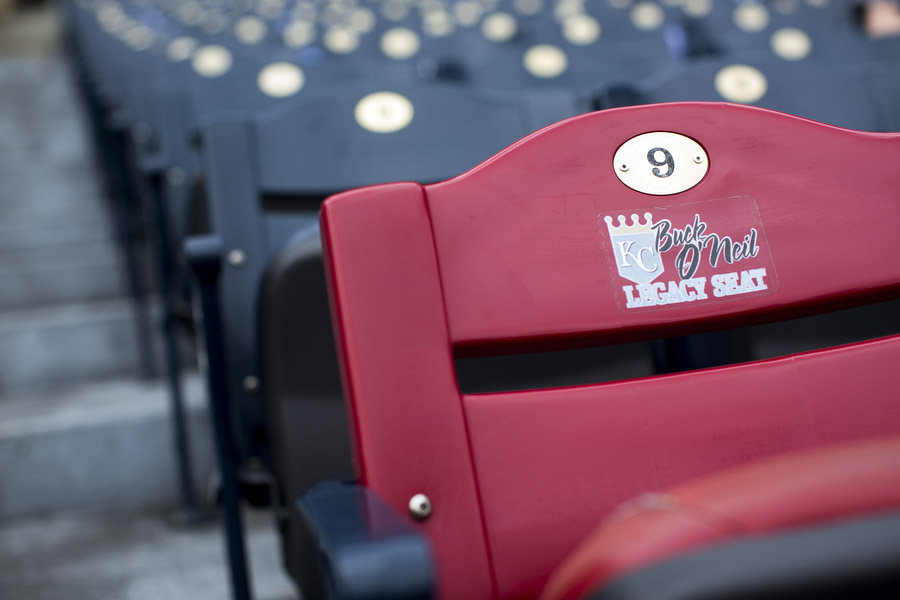 In 2007 The Royals dedicated a single red seat among a sea of blue seats in honors the legendary Negro League star, Buck O’Neil.  At each home game one person was chosen to occupy this special seat in recognition for their contributions and impact on their neighbors.

The Royals played 81 home games that season and for each of those home games, Buck O'Neil's red stadium seat, section 101, row C, seat one, never went empty. For me, this single feature sets Kauffmann Stadium apart from any of the MLB stadiums that were built before or since.

It was an ingenious idea that showcased Ewing Kauffman's true love of the Game of Baseball. 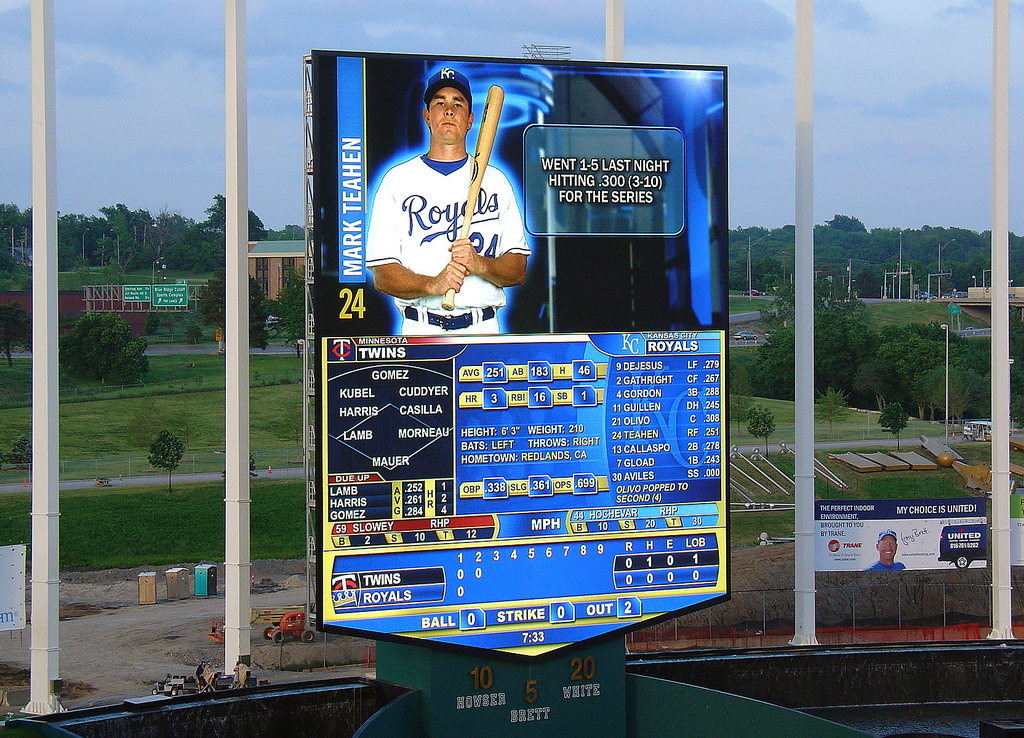 One of the first orders of business for the stadium renovation was to upgrade the outdated and aging Matrix score board. If you want to see them sweet you need High Definition and Kauffman Stadium went for the Gusto.

The upgrade was a dazzling, 100-by  85-foot Daktronics display utilizing HD-X LED technology  which, at the time, was the largest HD LED board in the world. It would be eventually dwarfed by the new scoreboard at Seattle's Safeco Field but, even today, it is a spectacular display of HD technology.

At a cost of $8.3 million the video scoreboard came equipped with a control room and an operating staff of 17. 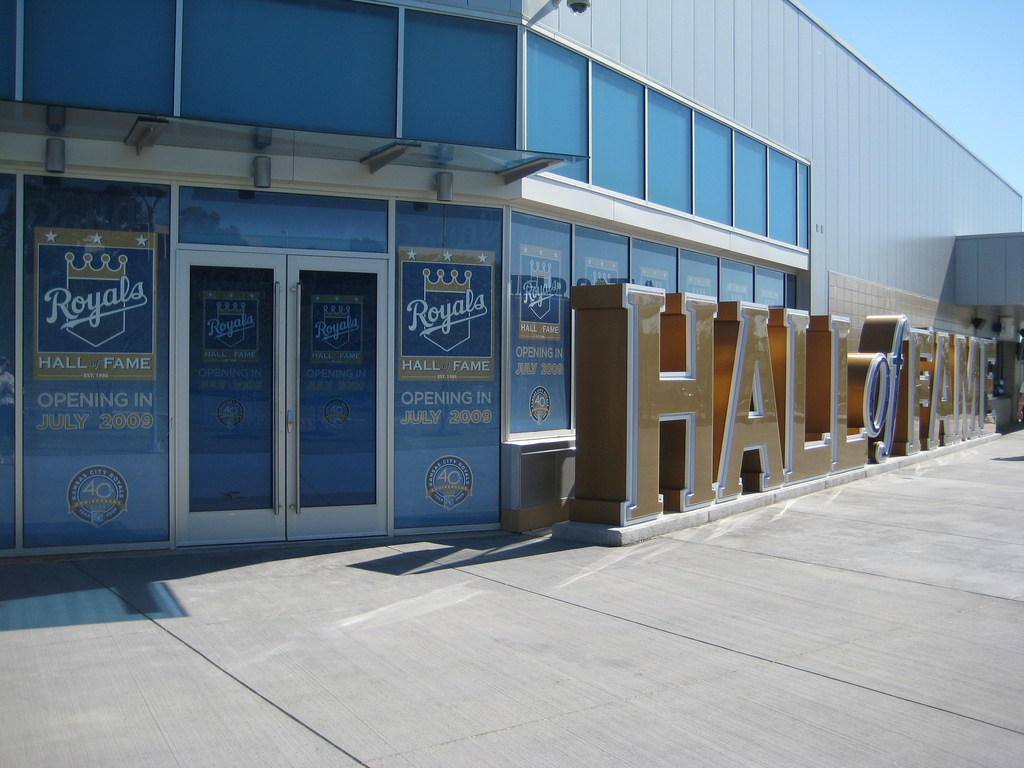 Everything about Kauffman Stadium oozes Baseball. Take a look out over the left field fence and you will see what many feel is the stadiums finest feature, the "Royals Hall of Fame Museum". It Combines a first class educational experience with an interactive baseball history display that tantalizes the senesces.

When you couple the innovative marketing approach of the Buck O'Niel Legacy Seat Program with the  beautiful Royals Hall of Fame Museum you can see how the owners of this emasculate facility understand the game of baseball and the fans who love the game so much. 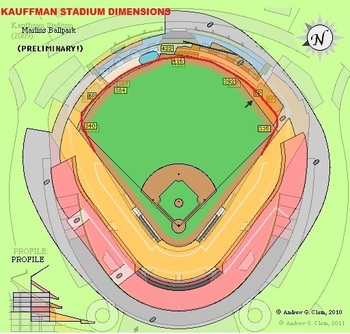 Kauffman Stadium is the crowning achievement of Ewing Kauffman and the Kansas City Royals that continues to delight fans of all ages. The only thing that this beautiful stadium is missing is a roof. Although they tried and failed you may, someday, see that feature.

If done, this park may last another 42+ years and it could join Fenway Park and Wrigley Field in the annals of Baseball Park legends.

Kansas City Baseball fans will have yet another reason to come and enjoy the world's most beautiful game.