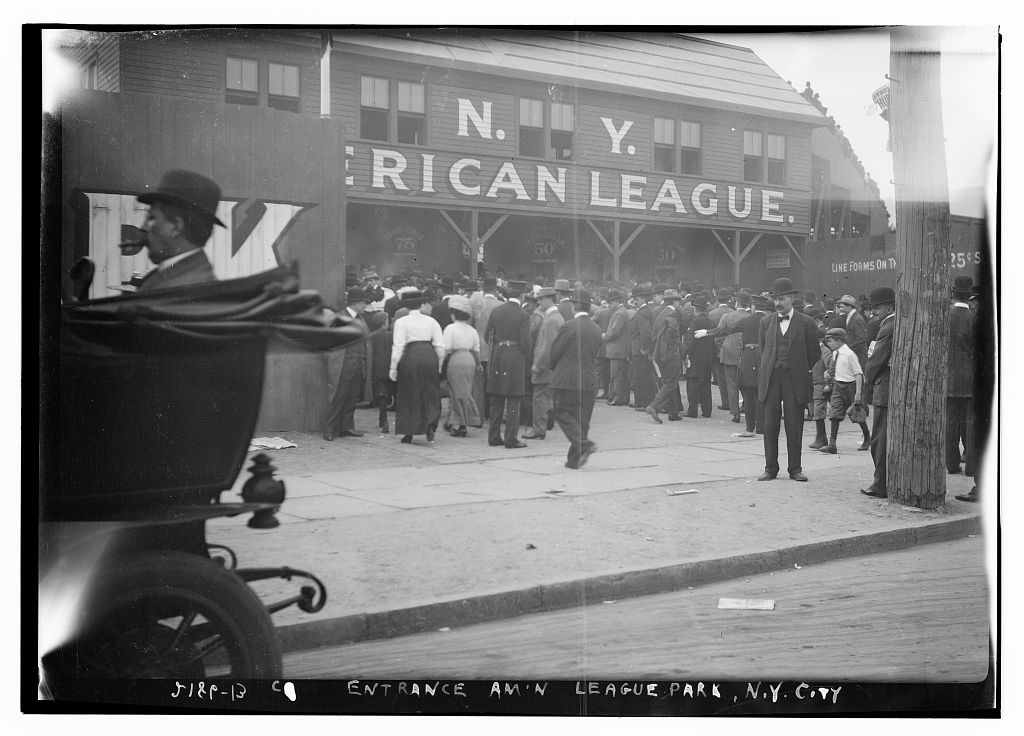 I need a Big League Ballpark and I need it in 6 weeks! Yea Right, and I've got a Bridge I want to sell you. Well, Bryan Bancroft Johnson ("Ban") did just that when he built himself a ball park  for his "Highlanders" Baseball team. He chose to build this new park in the Washington Heights neighborhood of New York City.

That park was HillTop Park and little did we know that it would start a turf war between the three existing leagues, National League, the American Association and the Players League. That move, ushered in a new era in Baseball and baseball field construction.

The, American League, with the strong backing of William Ambrose Hulbert and John T Brush, was determined to enter the New York market.

So in 1903, when New York acquired a franchise from the fledgling American League of Baseball, John T Brush and two businessmen, Frank Farrell and Bill Devery, bought the Baltimore Orioles for $18,000 and brought them North.

Hill Top Parks very existence was a byproduct of that turf war between John T Brush and Bryan Bancroft "Ban" Johnson over the control of the growing baseball business. This war effectively transformed Baseball from a Small Business into a lucrative Industry that was fueled by the construction of Baseball Stadiums and Hill Top Park was at the forefront of that growth.

Hulbert was one of the founders of the, then, well established but financially struggling National League (National Association) and Ban Johnson was founder and first president of the upstart and emerging American League.

The ballpark's formal name (as painted on its exterior walls) was American League Park, but know by almost everyone as Hill Top Park. The building of the Park, furled a rush on baseball stadium construction and Ban Johnson found himself competing with the building of parks likes, Washington Park, Manhattan Field and  The Polo Grounds for fans.

Enter John T Brush as one of the team owners looking for a home for his club in the New York area.

Johnson and Brush quickly became adversaries. and as chairman of the NL's executive committee, Brush took a lead role in combating the entry of the AL.

He joined with Giants majority owner Andrew Freedman to sabotage the AL's, Baltimore, club by offering the managing jobs of the New York and Cincinnati teams to John McGraw and Joe Kelley respectively.

Baltimore was forced to relocate to New York after 1902, eventually becoming the New York Yankees.

Built in a remarkable 6 weeks the HillTop Park required constant maintenance and because of that it never gained any fan appeal.

The bad blood between the two men dated back to the early 1890s, when Brush’s tenure as principal owner of the Cincinnati Reds was regularly lambasted by young sportswriter Ban Johnson of the Cincinnati Commercial-Gazette. Thereafter, the two continued to butt heads when Johnson assumed the presidency of the Western League, whose dominant Indianapolis team was owned by Brush.

Both men had a starkly different visions of how the game of baseball should be played and Johnson was disturbed and troubled with the gambling atmosphere surrounding the ballparks.

Bush, on the other hand had a vision that marketed the upstart American League as a cleaner much more family friendly version of Baseball but embraced Game Wagering because it attracted fans to his Ballpark. 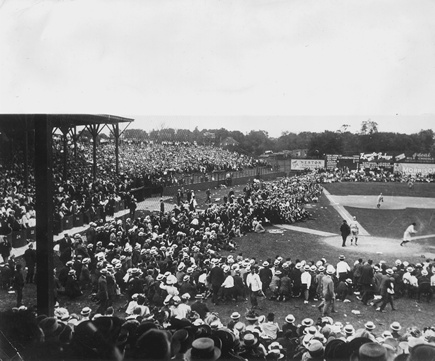 By today's standards, Hilltop Park was characterized as a dump but at the time it meet all of the minimum standards for a professional stadium. Suffering from the lighting speed of construction (6 weeks) the park was always in need of repair. The park featured a no-frills grandstand with a single-decked roof that extended out a few feet.

Hill Top Park was built of all wood and like the other ballparks of the time built as a Cathedral to the Game. The park had an excellent view of the Hudson River and the New Jersey Palisades.

The scoreboard was in left, the club house was in center, and the exit was in right. In right center there was a large Bull Durham sign shaped like a Bull. When the park first opened (April 30, 1903) there was a huge hollow in right field that was roped off. All balls hit over that rope were doubles. On June 1st a fence had been built in front of the hole and all balls hit over it were homers.

There were more than 15,000 seats, throughout the park with additional room for thousands more who stood along the outfield foul lines. 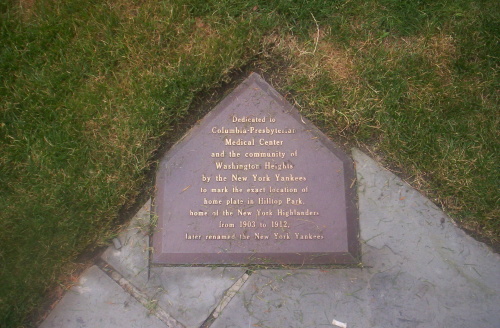 Hilltop Park was demolished in 1914, and Columbia Presbyterian was built on the site in the 1920's. In 1993, the Yankees presented a plaque shaped like a home plate to the hospital to commemorate Hilltop Park. Hilltop's home plate, is located in a garden at the hospital, off West 165th Street.

Despite its glorious history the park did not stand the winds of time. It wasn't able to join the annals of Oldest Baseball Parks as did Fenway Park and Wrigley Field.