Jewel-Box-Stadiums,..What The Heck Are They?

In the beginning they were all made of Wood. 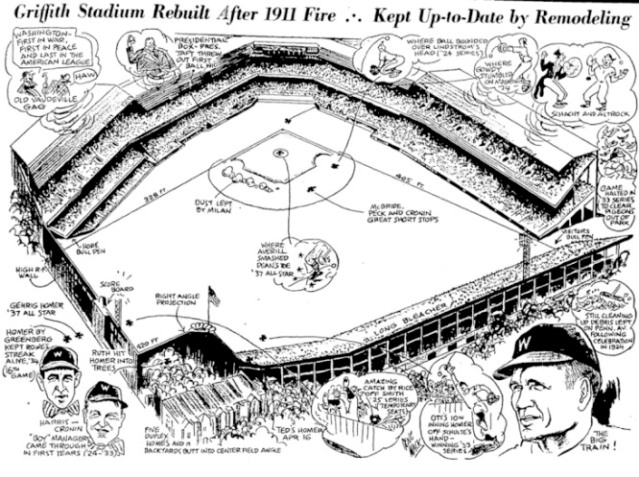 Jewel-box-stadiums, what the heck are they?  Great question, the term Jewel Box was given to a group of baseball parks that were built between 1895 through 1923. These baseball parks were built, or rebuilt, using steel and concrete as the core building materials.

From 1875 through 1903 there were 28 wooden baseball parks constructed in the United States. Owners were very cautious about the business of baseball and, because of cost, built those first baseball stadiums using wood as the primary building material.

Baseball was off and running and it became clear that the baseball parks were the Cash Registers needed to help drive its growth. Owners and Investors no longer questioned their ability to turn a profit so the Jewel-Box-Stadiums made much heavier use of brick and steel in construction as opposed to wood.

The first of these jewel-box-stadiums was Shibe Park, built in 1909. Designers of this park opted for a two-tier grandstand design to take advantage of the much stronger steel supports. The upper levels would come closer to the field giving the park a much more intimate feel. The downside however was that the support structures would block the view of some fans in the lower level.

The two-tiered grandstands quickly became the standard for decades until the New York Yankees built Yankee Stadium. They built a three tiered Jewel-Box-Stadium to harness the large crowds that Babe Ruth drew. This marvel became the largest baseball park of its time.

Go ahead, see if you can Imagine being at opening day at one of these early Jewel-Box-Stadiums.

Each of these baseball parks was special in its own way but the ones that bring back the sweetest memories for me are the Following: 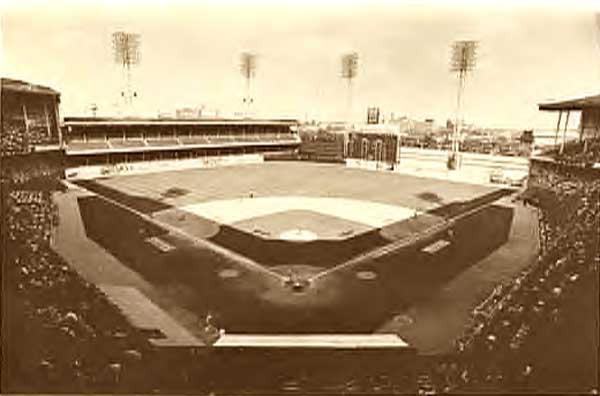 Shibe Park was the home of the Philadelphia Athletics of the American League (AL) and the Philadelphia Phillies of the National League. Opened April, 12th 1909 it became one of baseball's first steel and concrete Jewel-Box-Stadiums. 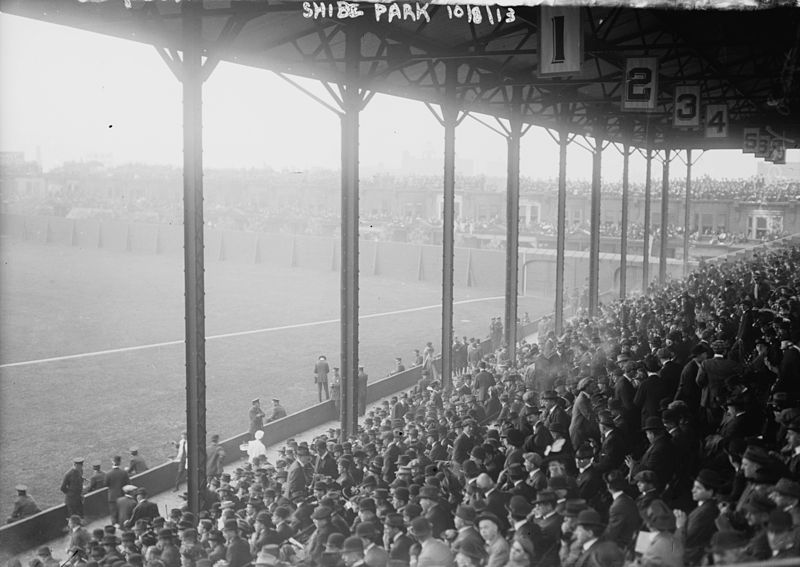 In 1922 A's President Tom Shibe died, and Connie Mack succeeded in gaining control of the team by buying out Tom Shibe's share from his widow. The baseball stadium was then renamed Connie Mack Stadium.

Shribe Park was a neutral site venue for the Negro League World Series. The Cleveland Buckeyes defeated the Homestead Grays 5-0 to win game four and sweep the Series.

Charles Ebbet's daughter throws out first ball at an exhibition game April 5, 1913. The park formally opened on April 9th against the Philadelphia Phillies. 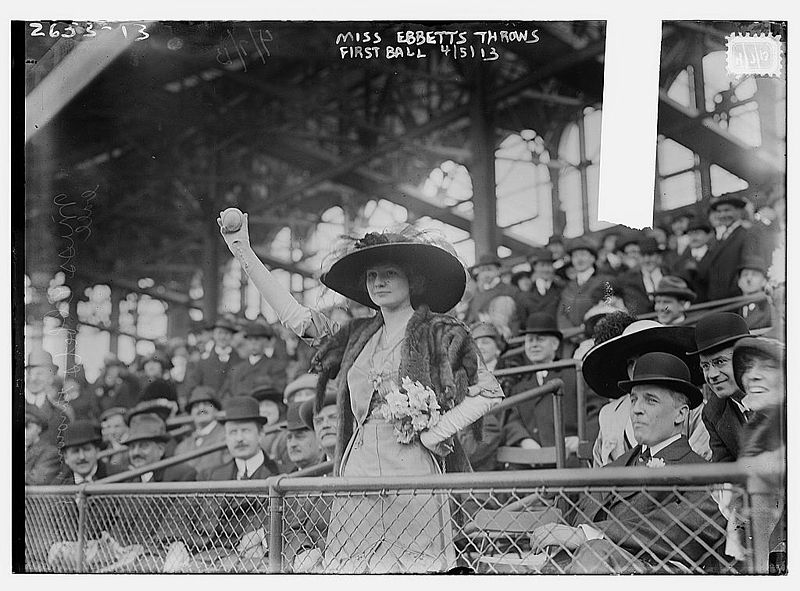 Owned by Charlie Ebbets and built in 1913, Ebbets field served as the home for the Brooklyn Dodgers of the National League through 1957.

Ebbets field was located in the Flatbush section of Brooklyn, New York City. This Jewel-Box-Stadium was the permanent replacement for the old wooden Washington Park stadium built in 1880's. Ironically this Jewel Box was built on the site of an old garbage dump called Pigtown. Many complained of the unmistakable aroma (Remnants of Pigtown)  that would often permeate the air.

The park featured no seating in left or center fields. The right field wall was fairly high with a short, 300ft porch. The initial design did not include a screen or scoreboard but were added later. >>>More Ebbets Field 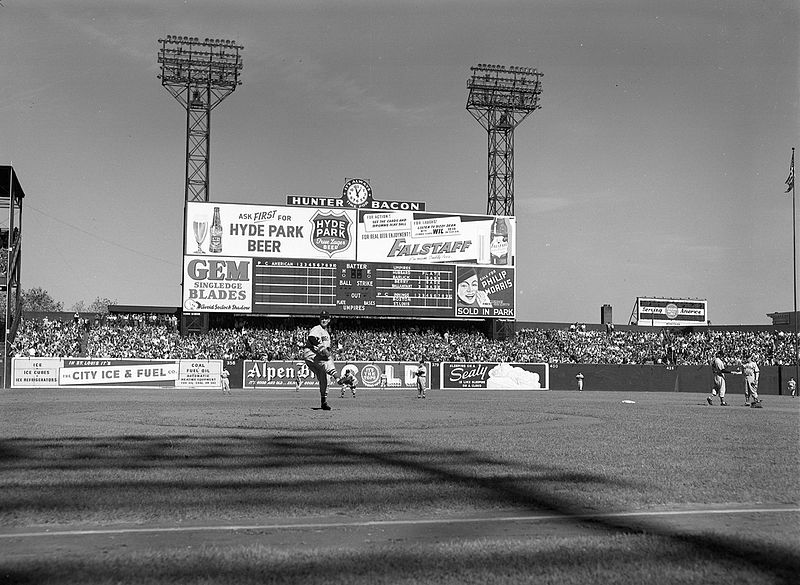 After the death of owner Phil Ball in 1936, the family sold the Browns to businessman Donald Lee Barnes but the Ball estate maintained ownership of Sportsman’s Park until 1946 when the deal closed for just over $1 million.

Sportsman’s Park was the third of the new jewel-box-stadiums that made heavy use of the new steel and concrete grand stand design (Second Shibe Park). Sportsman’s park went through several upgrades to gain more seating space.

In the early 50’s there was an intense revelry between the new owners of the Brown’s and Cardinal owners. It was becoming increasingly clear that the city could not support two teams. Bill Veeck caught an unlucky break when Cardinals owner Fred Saigh was forced to plead no contest to tax evasion and eventually had to sell the Cardinals to Anhauser-Busch in 1953. That is when Sportsman's Park dawned the name of Busch Stadium.

Sportsman’s Park/Busch Stadium was the site of a number of World Series contests. The first back in 1880’s and then in the modern era with the 1964 Series which was particularly memorable in that it was the parks last Series.

This is just a brief tour of three remarkable Jewel-Box-Stadiums. We only scratch the surface of the rich history of the Baseball Field.  Future articles will be dedicated to the history of each remarkable park and how they left their mark on the game of Baseball.

I want to leave you with a short video that adds a bit more flavor to this special era in the history of the Baseball field.

So the answer to the question of ,what is a Jewel Box Stadium, is's really kind of clear. Its merely a metaphor for Baseball's purse strings, the actual cash box that the game of baseball built around. The field is where we all came to watch dreams come true and sometimes fortunes lost and it all happens in the same game.