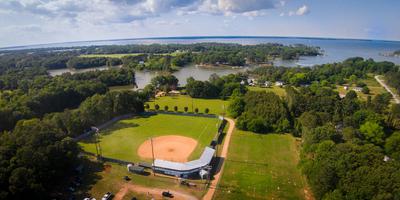 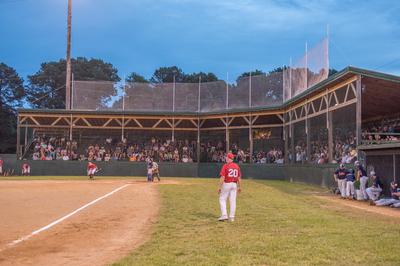 Note the construction of the Grandstand. This construction mimics that of the early Wooden Baseball Park construction. A Great spot to watch a game as the fans are closeup and personal. 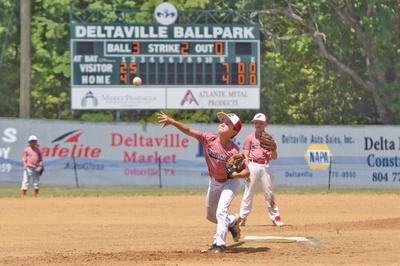 Add this park to your bucket list. The cost of admission is $6 for adults, $3 for teens, and kids 12 & under free.

Originally constructed in 1948, Deltaville Ballpark has served as home to amateur, semi-pro, scholastic, and youth baseball for over 70 years. It seats approximately 300 fans. Located on Ballpark Road in the waterfront village of Deltaville (population approximately 1,000), it is owned by the local non-profit community group, the Deltaville Community Association.

Starting in 2015, a campaign to complete much-needed renovations to the ballpark got underway, resulting in the needed replacement of the original metal roof, the replacement of a new scoreboard (whose predecessor had been struck by lightening), and currently fundraising is underway to rebuild the bathrooms and construct a ramp into one of the entryways to bring the ballpark into handicap/ADA compliance. All of the renovations have been carefully planned to not take away from the "look and feel" of the original ballpark.

Today, the ballpark is home to the Deltaville Deltas, an 18+ amateur wood bat team, American Legion Post 273, and also hosts an annual Little League weekend where the field is set up for Little Leaguers ages 8-16 from surrounding leagues to play games in the stadium, complete with announcers and music. The facility is also used for various other events throughout the year, and in the past has hosted charity softball games, weddings, concerts, and other events.